Eyes on Him. Release good opinion of Jesus.

What do we do when we are going through a time of fire?

Daniel 3:17-18
If that is the case, our God whom we serve is able to deliver us from the burning fiery furnace, and He will deliver us from your hand, O king. But if not, let it be known to you, O king, that we do not serve your gods, nor will we worship the gold image which you have set up.”

These 3 young men made faith confession. The result was the king was so angry and told the men to increase the intensity of fire

Daniel 3:24-25
Then King Nebuchadnezzar was astonished; and he rose in haste and spoke, saying to his counselors, “Did we not cast three men bound into the midst of the fire?”
They answered and said to the king, “True, O king.”
“Look!” he answered, “I see four men loose, walking in the midst of the fire; and they are not hurt, and the form of the fourth is like the Son of God.”

Jesus the 4th Man will be with us in the fire.

John 16:33
These things I have spoken to you, that in Me you may have peace. In the world you will have tribulation; but be of good cheer, I have overcome the world.”

Be of good cheer! The 4th Man will be in the challenge with us.

Jesus Himself taught us to pray to not lead us into temptation.

Daniel 3:27
And the satraps, administrators, governors, and the king’s counselors gathered together, and they saw these men on whose bodies the fire had no power; the hair of their head was not singed nor were their garments affected, and the smell of fire was not on them.

Daniel 3:30
Then the king promoted Shadrach, Meshach, and Abed-Nego in the province of Babylon.
Nebuchadnezzar’s Second Dream

Testimony –
A staff team. After her baby, Sophie was born, her left eye lid was going down because of a disease.
The specialist said it was impossible for her to recover without surgery. As Jesus is, so shall Sophie’s eyes be.
They have been taking holy communion. Sophie asked for more than once a day.
She is getting better.
—
Don’t overprotect your children. Show them a life of overcoming challenges.

You are in the midst of fire, know that He will deliver you in the fire.

Spiritual promotion is waiting for u

What do we do when there is a flood?
Noah’s name means rest.

He is the man who will rest in His love and faithfulness
Rest in Him. That man will be preserved in every flood.

Genesis 6:14
Make yourself an ark of gopherwood; make rooms in the ark, and cover it inside and outside with pitch.

Genesis 6:16
You shall make a window for the ark, and you shall finish it to a cubit from above; and set the door of the ark in its side. You shall make it with lower, second, and third decks.

The window was not at eye level.

Rest in His goodness

Jesus laid down His life for us. The nails were driven in His hands. We are in the ark protected.

Genesis 6:8
But Noah found grace in the eyes of the LORD.

Isaiah 59:19
So shall they fear
The name of the LORD from the west,
And His glory from the rising of the sun;
When the enemy comes in like a flood,
The Spirit of the LORD will lift up a standard against him.

He will lift up a standard against the enemy

On a hill called Calvary, Jesus became the lamb of God who was slain for the sin of the world.

God raised up Jesus. Christ has redeemed us from the curse of the law.

We the righteousness of God can expect Jesus redeem us from every flood.

The Redeemer of Israel
But now, thus says the LORD, who created you, O Jacob,
And He who formed you, O Israel:
“Fear not, for I have redeemed you;
I have called you by your name;
You are Mine.
When you pass through the waters, I will be with you;
And through the rivers, they shall not overflow you.
When you walk through the fire, you shall not be burned,
Nor shall the flame scorch you.

Fear not for He has redeemed us.

We are His. When we pass the water, He will be with us.

Every fire and every flood, He has bring us out into great fulfilment. 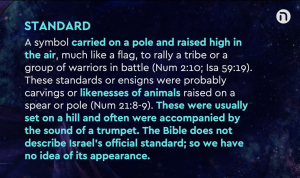