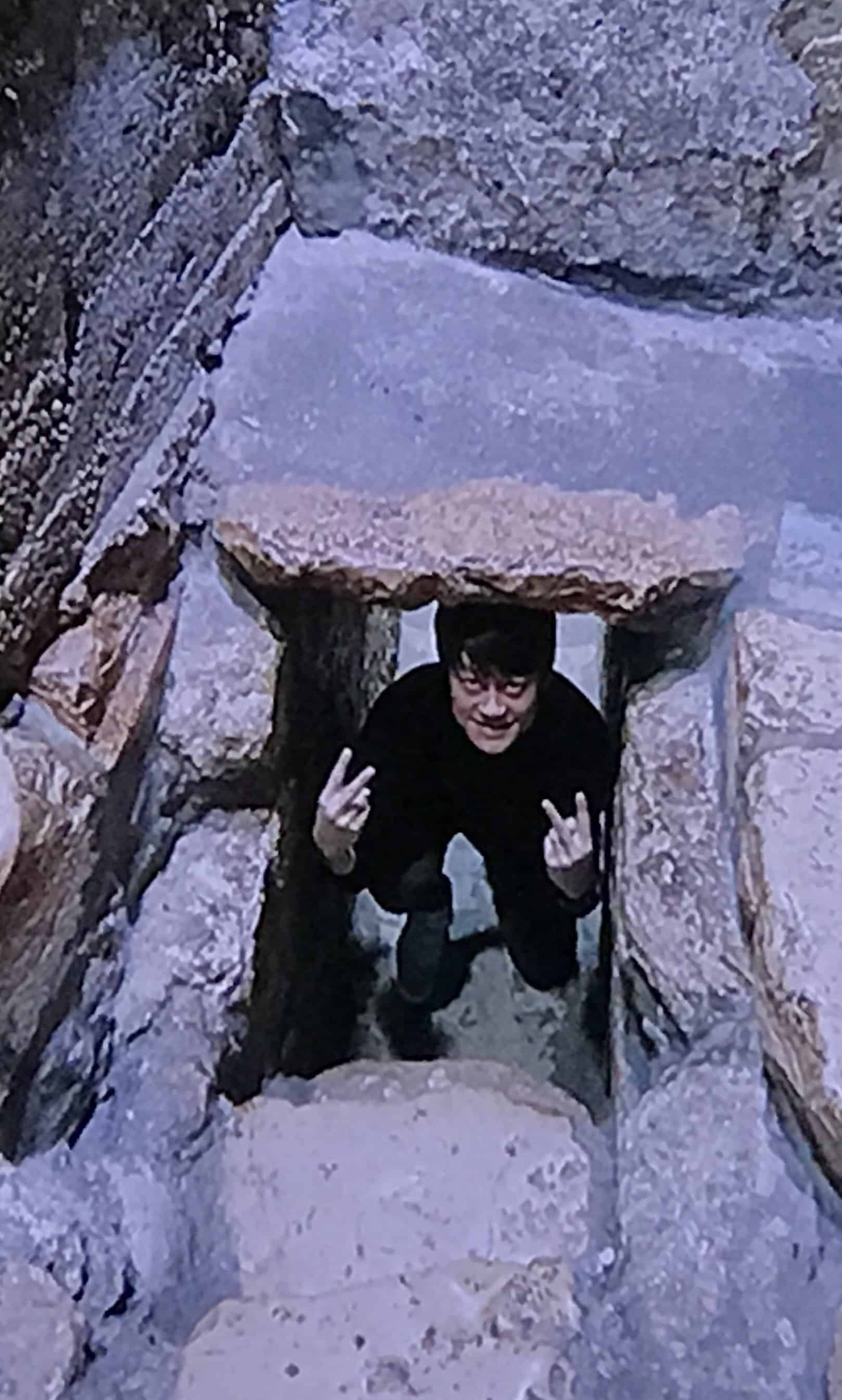 How to overcome the fear in your life

Whatever you need, God will meet you at the point of your need.

The fear of alone and growing old is real.

Fears are real. But God knows exactly where you are living and the season you are at.

Is ok to be fearful but do not remain in the fear.

God is greater than your fear!

The number 1 fear is not the fear of death. It is the fear of speaking in public! Public speaking.

David was escaping from Saul.

David asked Ahimelech, “Do you have a spear or sword of any kind around here? I didn’t have a chance to grab my weapons. The king’s mission was urgent and I left in a hurry.”

The priest said, “The sword of Goliath, the Philistine you killed at Oak Valley—that’s here! It’s behind the Ephod wrapped in a cloth. If you want it, take it. There’s nothing else here.”

Now he needed a weapon because he was fearful. Fear came in. When fear comes in we will turn to whatever thing we think we need to rely on.

It is not money. It is your trust in the Lord.

This same teenager who grow up, he forgot his trust was in the Lord. It is not what you have.

And at that, David shot out of there, running for his life from Saul. He went to Achish, king of Gath. When the servants of Achish saw him, they said, “Can this be David, the famous David? Is this the one they sing of at their dances?

Saul kills by the thousand,

David by the ten thousand!”

When David realized that he had been recognized, he panicked, fearing the worst from Achish, king of Gath. So right there, while they were looking at him, he pretended to go crazy, pounding his head on the city gate and foaming at the mouth, spit dripping from his beard. Achish took one look at him and said to his servants, “Can’t you see he’s crazy? Why did you let him in here? Don’t you think I have enough crazy people to put up with as it is without adding another? Get him out of here!”

David was known to be the man of war. A man of accomplishment.

David was afraid. He pretended madness.

In order to protect himself he pretended madness. He was afraid.

This was the lowest point of David’s life. His own king want to kill him. He had to escape to his enemy who wanted to kill him.

He was very much afraid.

Man distressed, in debt, discontented gathered to David. They came to David. He became a leader over them. The mark of leadership is who they become after they follow you.

Only one son of Ahimelech son of Ahitub escaped: Abiathar. He got away and joined up with David. Abiathar reported to David that Saul had murdered the priests of God.

David said to Abiathar, “I knew it—that day I saw Doeg the Edomite there, I knew he’d tell Saul. I’m to blame for the death of everyone in your father’s family.

Stay here with me. Don’t be afraid. The one out to kill you is out to kill me, too. Stick with me. I’ll protect you.”

Psalm 56- the secret of overcoming fear

Prayer for Relief from Tormentors

To the Chief Musician. Set to “The Silent Dove in Distant Lands.” A Michtam of David when the Philistines captured him in Gath.

Be merciful to me, O God, for man would swallow me up;

Fighting all day he oppresses me.

My enemies would hound me all day,

For there are many who fight against me, O Most High.

Whenever I am afraid,

I will trust in You.

In God (I will praise His word),

In God I have put my trust;

I will not fear.

What can flesh do to me?

Whenever I am afraid i will trust in Him!

I will not fear.

He was afraid but he trusted in God.

I will not fear!

Put your trust in Him!

Whenever you are afraid, put your trust in Him.

His word is true!

You number my wanderings;

Put my tears into Your bottle;

Are they not in Your book?

When I cry out to You,

Then my enemies will turn back;

This I know, because God is for me.

God knew everything he was going through.

You put my tears into your bottle.

David must have cried many many tears. But God sees your pain and your anguish and He remembers! He knows what you are going through. He cherish you and He is here to save you !

He is not far away. He bottled your tears because He cares for you.

God is for me!

In Psalm 56 David had revelation that God is for him!

If God be for us, than who can be against us ?

In God (I will praise His word),

In the Lord (I will praise His word),

In God I have put my trust;

I will not be afraid.

What can man do to me?

I will not be afraid.

David placed his trust in the Lord because he had revelation that God is for him!

Today God is on our side. Our sin are forgiven. God is for you, what can man do to you. Do not be afraid, my friend!

One of the greatest fear man has is fear of death.

In the end times when we see earthquakes, famines, all kind of things happen, man’s heart will fail them because of fear.

The fear of death leads to bondage.

We do not need to fear death!

Now Martha said to Jesus, “Lord, if You had been here, my brother would not have died. But even now I know that whatever You ask of God, God will give You.”

Jesus said to her, “Your brother will rise again.”

Martha said to Him, “I know that he will rise again in the resurrection at the last day.”

Jesus said to her, “I am the resurrection and the life. He who believes in Me, though he may die, he shall live. And whoever lives and believes in Me shall never die. Do you believe this?”

Jesus came to raise Lazarus from the dead. He was dead for 4 days.

Jesus already knew what He will do and that He will raise Lazarus from the dead.

Martha thought it will happen in far future.

Jesus said He is the Resurrection and the Life!

Whoever believes in Him shall never die!

Why did Jesus weep?

It was not because of Lazarus. He knew the outcome for Lazarus.

Our God is a God who can feel your pain your sorrow and your anguish. He knows exactly what you are going through. When He sees you crying He feels your heart, your pain. He cries together with you. He will take your tears and bottled them up.

He will walk with us in the lowest valley.

He is able to cry and feel with you and able to stop the pain!

God feels for you. You are not alone!

He does not just feel for you. He will stop the pain!

The pain of the loss of the loved ones. Especially when it is unexpected death. Who can explain that? We are angry with the world. Some lives with the pain for the rest of your lives.

Jesus cries with you. Jesus loves you. If you are crying He is crying with you. He is hugging you. All is well. Jesus has the power to stop the pain.

If anyone says He is the Resurrection and the Life, we will laugh. To make that claim, you are either lier or you are who you said you are.

No man has ever raised a dead man to life.

Lazarus was dead for 4 days !

Jesus went to the tomb. He said roll away the stone. He said Lazarus come forth! He came forth alive!

Lazarus Raised from the Dead

Then Jesus, again groaning in Himself, came to the tomb. It was a cave, and a stone lay against it. Jesus said, “Take away the stone.”

Martha, the sister of him who was dead, said to Him, “Lord, by this time there is a stench, for he has been dead four days.”

Jesus said to her, “Did I not say to you that if you would believe you would see the glory of God?” Then they took away the stone from the place where the dead man was lying. And Jesus lifted up His eyes and said, “Father, I thank You that You have heard Me. And I know that You always hear Me, but because of the people who are standing by I said this, that they may believe that You sent Me.” Now when He had said these things, He cried with a loud voice, “Lazarus, come forth!” And he who had died came out bound hand and foot with graveclothes, and his face was wrapped with a cloth. Jesus said to them, “Loose him, and let him go.”

When Jesus made the claim, He proved it. He is telling everyone He is not lying. He is God!

Jesus is the Resurrection and the Life!

And He led them out as far as Bethany, and He lifted up His hands and blessed them. Now it came to pass, while He blessed them, that He was parted from them and carried up into heaven.

The last thing our beautiful Saviour did was to bless His disciples. His heart is to bless you! Bless and bless somemore.

While He blessed them He was departed.

The last spot was at Bethany.

Bethany has a special place in Jesus’ heart.

The place that Jesus feels most at home, cherishes, is a place of house of depression and misery.

In your pain, misery, struggles of this life, He wants to be with you.

In your greatest pain, He wants to be there.

At the lowest point of your life, Jesus carries you! He keeps your tears in the bottle, He cries with you.

He is at home with you.

If you are facing suicide thoughts, i command this thought to be out! Never to return!

There is a reason to live! He is your reason!

He loves you! What a beautiful Name! Jesus loves you!

Hope does not disappoint. Hope and fear are counter to each other.

Bible hope is confident of expectation of good things to come!

Hope comes when you realise how much God loves you!

There is no fear in love. Perfect love cast out fear.

and not in any way terrified by your adversaries, which is to them a proof of perdition, but to you of salvation, and that from God.

Do not be in any way terrified by your adversaries.

When u r not afraid, sickness is over.

Your salvation comes when you stop fearing!

You are not afraid, your enemies died and you get victory!

Whenever is challenging over you, it is under your feet because you have Christ!

Let your hope arise! Trust Him! Believe God for the absolutely best outcome!

Jesus’ heart is with you.

He is so good and so kind.

We cannot base our faith on what people think.

Our God is the Resurrection and the Life!

One of Pastor’s greatest fear is his marriage will fear. But God is good! By the grace of God, God has blessed him!

This was written after a tragedy

Everyday the Lord Himself is near me. All my cares He will bear and cheer me.